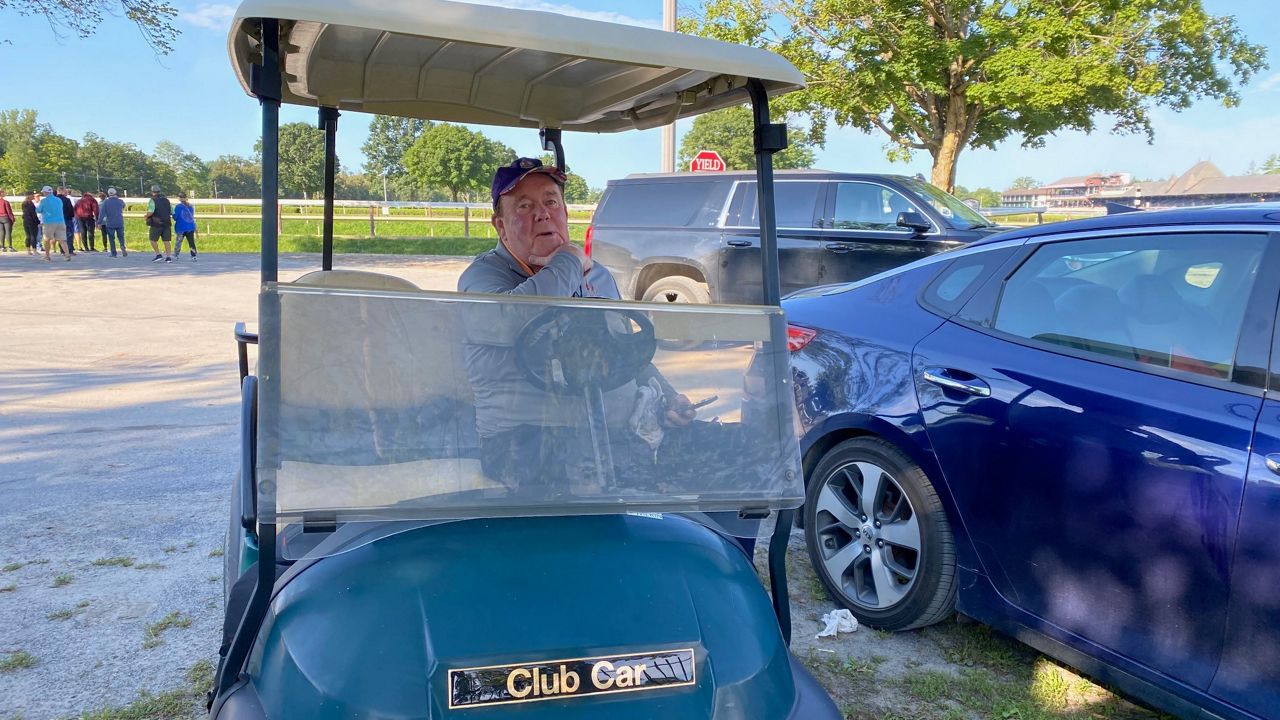 Every day at Saratoga sucks, not just for the bettors but the professionals too – people like the writer Tim Wilkin, who has been here for decades.

“My first was in 1981,” said Wilkin, thinking back to his first year at the Saratoga Race Course. He was a young reporter for the Schenectady Gazette. Wilkin says he fell in love with the sport watching the Belmont Stakes with his mom every year. He never envisioned a career in racing, but when he got to the capital region, the Gazette was looking for a sports journalist to cover Saratoga. Wilkin jumped, and 40 years later he’s still here, now at the Times Union.

Most of Wilkin’s days are similar on the route. They start early, end late and are always associated with a bit of luck.

As Wilkin jumps out of his golf cart and heads for the fence at the end of the track, he asks photographer Skip Dickstein: “Do you see him?”

“Could that have been him?” asks Wilkin as dozens of brown horses go by. Dickstein answers,

“Could be, yes,” said Dickstein.

Wilkin jokes back with his dry wit.

After several minutes and dozens of camera clicks, Wilkins asked himself, “Do you think that was him?” was answered by Dickstein with 95 percent certainty.

All of this works for a super small part of his story, Wilkin hops back into his golf cart.

“Let’s see if we can find out,” says Wilin and goes to the barns across the street.

Once here, he speaks to the trainer and confirms that it was actually Maxfield in the picture. The real work begins when Wilkin interviews Brendan Walsh, the coach, and Jose Ortiz, the jockey.

Once that part of the morning is over, Wilkin drops off his golf cart, starts charging it for the next day, jumps in his car, and drives to the front end of the track.

Wilkin is a friendly guy, so he greets everyone on the way, then walks into the press box and starts with a little friendly chirp from some of the other journalists.

Between writing stories and the handicap for the next day, he’s already at the 5th race of the day, which Wilkin is particularly interested in because it was his best bet in the newspaper that day.

“Finished fourth. Didn’t have enough in the tank,” he said of his choice.

After all, he comes to the big races of the day. The first, the Vanderbilt. The horse Wilkin wrote about in the newspaper earlier this week didn’t win, but that has yet to be followed up. The coach never got into the winning circle. Instead, Wilkin had to walk through the mud on the track to interview him while he went back to the paddock to saddle another horse. You can’t imagine how many pairs of shoes he ruined on the track.

There is yet another big race of the day that Tim had to write and cover about.

“I need a nap, I have two more stories to write. What else do I have to do? Complete a disability story. It’ll be dark when I go, ”he said.

The big question is how many hours he spends on the track every day.

Horse Racing Eire face ‘physique of labor’ in recovering from the...

Speaking Horses: how Galileo and John Magnier modified the sport |...