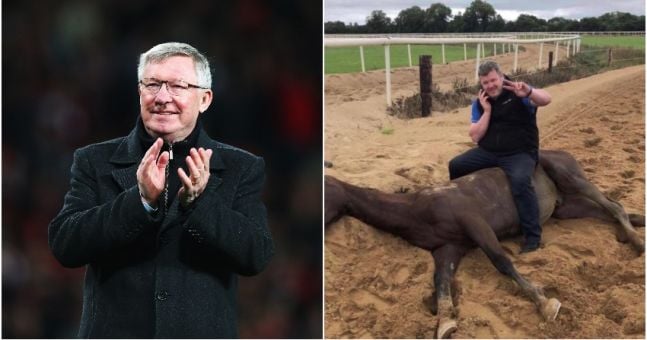 A photo surfaced earlier this year of Elliott posing for a picture while he was sitting on a dead horse in 2019.

The native Meath was then banned by the Irish Horseracing Regulatory Board for six months and suspended for a further six months.

The 43-year-old, whose driver’s license will be restored on Thursday, “deeply apologized” for the incident, saying he was surprised by the photo and had not tried to be numb.

Speaking to the Racing Post, Elliott announced that Ferguson – a horse racing fanatic – has reached out to him to offer his assistance.

The Scot reportedly likened the outrage against Elliott to the Eric Cantona drama when the Frenchman kicked a Crystal Palace fan in 1995.

Ferguson’s advice was to “ignore the sound” and ask for forgiveness.

“That’s all I can focus on now,” said Elliott. “I know it all set me back, but I’ve proven that I can train horses at any level and that’s all I want to do.

“I have to prove that the way people see me in the picture doesn’t reflect who I am,” he added.

“For myself, for my family, for my employees and above all for the industry and its supporters, I have to rise and prove to everyone that I am not a monster.

“I made a mistake, I understand, and I’m sorry for what I did. One chance to move on is all I’m looking for now.

“I think I just hope people will forgive me and let me move on by doing what I do best again: training winners.”